Lewis Hamilton has become a 4-time world champion in Mexico after a race that saw him finish 9th and Verstappen takes his rd career win.

There was a sea of penalties to be applied before the race including Ricciardo, Alonso, Hartley, and Gasly.

Vettel got a great start as Verstappen and Vettel came together at turn one and Hamilton went around the outside of Vettel at turn two.

But contact with Vettel caused a puncture on Hamilton’s rear-right and had to pit, Vettel also came in to change his front wing.

In all the commotion Ricciardo had moved from 16th up to 8t while Verstappen was in the lead.

On lap 6 Ricciardo pulled into the pits to retire the car, from a very good position.

By lap 9 the top 5 contained only 2 of the top 6 team’s cars, with Ocon, Hulkenberg and Perez being chased down by Raikkonen. Verstappen meanwhile had pulled out a 4-second lead.

Vettel seemed to be struggling t make progress and was still stuck behind Massa by lap 12 with Hamilton just 18 seconds behind.

He then tried a move but got pushed wide and had to go off the track to make the move, it turned out Massa got a snap of oversteer.

On lap 15 Grosjean received a 5-second penalty for leaving the track.

On lap 19 Perez pitted and Raikkonen could finally get into the top 5.

Meanwhile, Hamilton was still in 19th place and on the verge of being lapped by Verstappen.Hulkenberg and Ocon pitted on subsequent laps.

On lap 22 Verstappen lapped Hamilton, the first time he’d been lapped since 2013.

Vettel meanwhile was making great progress through the field and got himself up to 11th while at the same time Hamilton told the team he couldn’t catch the cars in front of him. He was then lapped by teammate Bottas.

On lap 26 Hulkenberg pulled to the side of the track after he was told to stop the car as it was unsafe and told how to get out.

Vettel was now in the points and fighting for 8th with Alonso and Ericsson, Hamilton on the other hand finally managed to overtake someone and begun chasing down 16th place.

The crowd cheered on lap 31 as homeboy Perez made move on Magnussen for 6th place.

On lap 32 Gasly made a diving move on Grosjean, which brought Massa into the frame, Gasly’s teammate, however, was smoke all over the track and pulled to the side with flames coming out the back of his car.

This brought out a VSC and caused nearly all the drivers to make a free pit stop including Verstappen, Hamilton, Raikkonen and Vettel who was the only one to take a set of ultrasofts.

Vettel was now in 7th and chasing down Perez at a rate of knots, but still needed to be 2nd to take the title fight to Brazil. Meanwhile, Hamilton was in 13th.

Vettel made a divebomb move on Perez on lap 51, locking up and taking 6th.The latter then pitted for ultrasoft tyres.

Hamilton then made his way past Vandoorne, now just 3 seconds off the points. Vettel then made a similar move on Stroll to get into the top 5.

With 13 laps to go Hamilton made the crucial move to get into the points as Vettel passed Ocon to take 4th.

Ericsson then came into the pits after his engine caught fire right in front of Gasly.

With 10 laps to go, Sainz pitted to retire, making it a double for Renault.

After following Alonso for several laps, Hamilton got the hurry up and started to fight for the position, nearly losing his front wing in the manoeuvre which failed to get him past.Hamilton tried again to get past Alonso but he wasn’t giving it up that easily, keeping both the Mercedes for several corners.

It was a superb drive from 19th to 4th for Vettel but not enough, as Verstappen won the race Hamilton claimed his 4th world title in 9th. 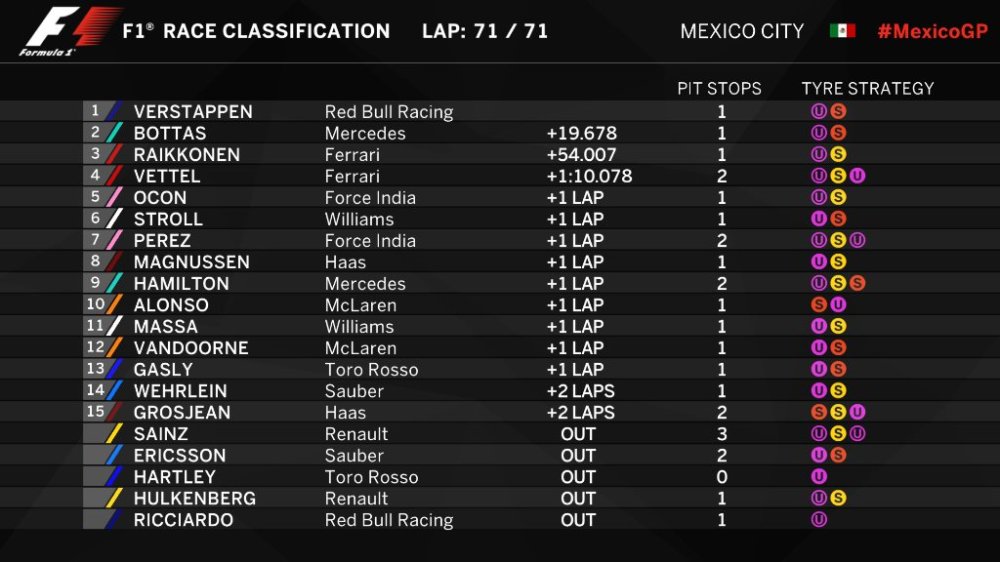