Lewis Hamilton has won the US Grand Prix to give Mercedes their 4th world title.

Well on what could have been the deciding weekend of the season, the Americans bigged it up big time. With all the drivers coming to the national anthem to legendary announcer Michael Buffer with Vettel and Hamilton’s standing facing the trophy.

Back to the actual race, and Hamilton backed the grid right up on the formation lap knowing it could hamper Vettel.

Off the start, a brilliant start from Vettel meant he took the lead at turn one as Ricciardo moved up to 4th.

On lap 2 Ricciardo ushed Bottas wide at turn one only for the Finn to get back past at the esses.

Verstappen meanwhile had moved up to 11th from 16th on the grid, and then dived down the inside of Perez at the hairpin to enter the points.

On lap 4 Ricciardo tried a huge diving move on Bottas, locking up, almost making contact and going straight off the track allowing Bottas back through.

Hulkenberg however, had pitted to retire for the 4th year in a row at the Circuit of the Americas just 5 laps in.

Lap 6 and with a 5 second lead to the rest Hamilton overtook Vettel at turn 12 and didn’t hang about, taking a 0.8-second lead.

Verstappen then did the same to Alonso as he soared past the Mclaren, Wehrlein, on the other hand, retired after contact with Magnussen at turn 12.

Hamilton’s team then came on the radio saying “plan A, plan A”. Ricciardo however, told his team the tyres were bad.

Meanwhile, Perez was having dingdong battle with Massa, as was Verstappen who had now made his way up to 6th after overtaking Ocon at turn 12.

By lap 11 Hamilton had pulled out a 3 second lead over Vettel who was complaining of blistering on the front tyres.

Raikkonen, now battling with Ricciardo, tried around the outside of turn 14 before the latter came into the pits for the supersoft tyres.

On lap 16 Ricciardo pulled off the track on the 3rd sector after his engine died.

Vettel came in just after for the softs trying to undercut Hamilton who was nearly 4 seconds ahead.

Bottas pitted on lap 18 for the softs and Hamilton followed suit a lap later coming out just in front of Vettel as the German chased him down once again.

Having not pitted yet Verstappen had now managed to take the lead of the race as he fought off Hamilton before Hamilton inevitably got past. The former final then made his pit stop for the softs on lap 25.

As for Alonso, he was having major issues as he slowed to snail’s pace before retiring with an engine issue.

On his F1 debut, Brendon Hartley was going very strong and fighting Stroll for 13th having not driven a single seater-open wheel car for 5 years.

The rivalry between Perez and Ocon was being fueled again as the former came over the radio saying Ocon needed to speed up. Ocon then came close to overtaking Masa at turn 12 when he locked but the Brazilian was able to get the place back as Perez got in on the action.

With Sainz and Kvyat earing down on the Force India’s, Perez was back on the radio asking the team let him through. After they refused Sainz was getting ever closer and got within half a second of the Mexican before Sainz made the move at turn 6 and solidifying it at turn 19.

He tried to get back but Perez now had Kvyat behind and closing in he had bigger problems.

Vettel now 6 seconds behind Hamilton on lap 35, asked the team about switching to a 2 stop.

Bottas then locked up at turn 12 and Raikkonen looked at a move but thought better of it and stayed behind as the same thing happened again the next lap only for Raikkonen to go wide at turn 13.

Verstappen meanwhile was catching them but switched strategies to put the supersofts for a final push to the end.

On lap 39 Vettel decided to make the 2 stop and pitted for a set of supers, coming out with Verstappen close behind.

Raikkonen meanwhile was fighting with Bottas for 2nd, he finally made the move on lap 42 as Bottas tried the switch back but to no avail.

As Vettel tried to lap Magnussen the latter slowed down and hit Ericsson’s car spinning into the run-off at turn 12. Ericsson would later get a 5-second penalty for the incident.

Ocon and Sianz where now battling for 6th going near side by side through turn 12, 13, 14.

Vettel, with 6 laps to go, was half a second behind Bottas and with a podium to loose fought hard but lost out to the German at turn one whilst Vandoorne got well out if the way.

Verstappen then decided he wanted a piece of the action getting very close to the rear of Bottas but still unable to get past. the Dutchman then tried to get past at turn 12 before a mistake for Bottas secured Verstappen’s 4th place. Bottas then pitted for a 2nd time.

As Vettel caught Raikkonen, team orders then came into play with the latter letting him past at turn one.

On the final lap, Verstappen was right on the back of Raikkonen and wasn’t going to let a podium escape him that easily, and he made it down the inside at 16 to take the podium as Lewis Hamilton won the race to give Mercedes their 4th constructor’s championship.

Unfortunately, Verstappen was handed a 5-second penalty for his move in which he left the track and so had to hand Raikkonen back the podium. 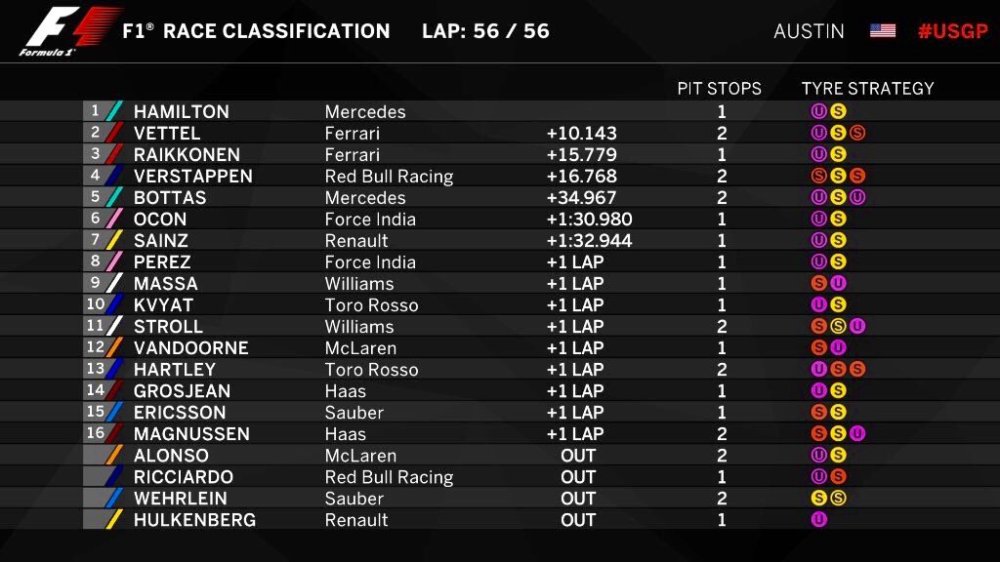