Lewis Hamilton has won the Singapore Grand Prix in a race that saw both Ferrari’s and Verstappen taken out at the first corner.

After 9 years and 10 races in completely dry conditions, Singapore started under damp conditions for the first time, making it the first wet night race in F1 as well.

As such the top 6 decided to start on intermediate tyres putting them all on a level playing field.

This also put the visibility under question with Raikkonen and Grosjean both complaining about it on the formation lap.

Off the start Verstappen got squeezed by Vettel who then squeezed Raikkonen and crashed at turn one with Verstappen and Raikkonen retiring, Alonso also got caught up in the incident. Bringing out the safety car straight away.

It also caused extensive damage to Vettel’s car with him spinning and smashing his front wing on the wall, leading to him retiring from what might be a crucial race for the championship. 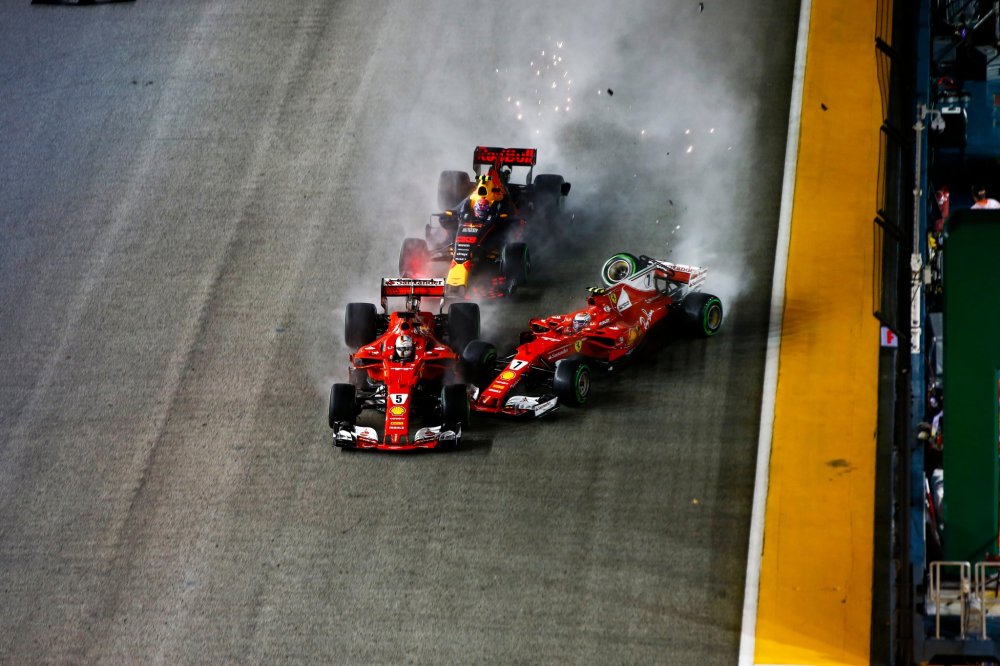 All this put Hamilton at the front as it seemed everything had played into his hands, It also allowed Hulkenberg to get up into 3rd.

On lap 4 the safety car came back in and Singapore went racing again.

Palmer was the star of the restart as he made a move on Bottas at turn one to take 5th place.

Vandoorne even tried a move on lap 5, it seemed Bottas was struggling in the tricky conditions.

Sainz went off at turn 1 on lap 6 having to go over run-off area.

Alonso was going slow on lap 7 being overtaken by both the Williams before the team told him they had lost data on the car.

On lap 9 we got the classic Alonso radio message “No power” as he retired with the team saying they had too many problems.

Meanwhile, Sainz moved up to 8th as he overtook the Force India of Ocon.

Lap 11 and Kvyat went straight off and into the wall while being chased Stroll and Magnussen, bringing out the safety car for the second time.

The pit lane then became active with Ricciardo and Ocon coming in for new intermediates while Sainz again went off at turn one. This moved Hulkenberg up into 2nd.

The Renault team decided to double stack their drivers in order to get new inters on as soon as possible.

On lap 13 Hamilton came on the radio asking if everyone but him had changed tyres, saying “I don’t think that’s a good idea”, but his team saying he would have been in P2 without track position.

The safety car came back in on lap 14 with Hamilton, Ricciardo, Bottas, Sainz and Hulkenberg making up the top 5.

Despite being on used and worn inters Hamiton managed to pull out a 1.9-second lead by lap 16.

Massa however, wasn’t going so well on full wet tyres being chased down by Ocon and Magnussen, the latter then soon made a move on Ocon and dived it down the inside to take the position.

He then chased down Massa and nearly came together with him on the back straight, but Massa came back at him only to be taken by Ocon as well. He then came in to change his wet tyres for a set of inters.

Sainz, on the other hand, was up in 4th place and being chased down by his future teammate Hulkenberg, who had recently matched the record for most starts without a podium finish.

Stroll locked up at the same place Kvyat had crashed and very nearly came to the same fate but just managed to avoid the wall.

Magnussen came in on lap 25 to become the first car on slick tyres on the drying track, Massa followed him in for the same stop, the eyes of the pitwall all watching to see if it was the right idea.

Massa was soon lapped by Hamilton who was running away with the lead by 6 seconds to Ricciardo.

Massa’s engineer came on the radio to ask if it was the right tyre, to which he replied yes as Williams brought Stroll in for the Ultras.

Sainz and Vandoorne were next to pit for slicks with Ocon, Magnussen and Grosjean following.

All these pit stops put Palmer up into 2nd place as Hamilton got the call to come in for ultrasoft tyres. Ricciardo now with 12 seconds to make up.

A tasty battle as beginning to brew between Palmer and Vandoorne and between Sainz and Perez with the former on slower tyres compared to Perez.

Perez tried it down the outside of turn 12 but could quite make it and had to stay behind for another lap.

The backmarker of Ericsson closed the gap between the two and Perez again tried to overtake at the end of the back straight but Sainz just held his position.

Ocon meanwhile dived it down the inside of Magnussen at turn one to take 11th place.

The yellow flags were brought out in sector 2 after Marcus Ericsson spun at the Anderson bridge and ended backwards with no way to turn around safely, and so the safety car was brought out again much to the disappointment of Hamilton who’s lead would seemingly now be destroyed.

Hulkenberg came into the pits as the team seemed to be refilling to hydraulics system on his car.

With the marshals taking a long time to tend to Ericsson’s car a 30-minute timer was started as the race was set to hit the 2-hour limit.

The safety car then came back in again with Ricciardo right up the gearbox of Hamilton.

The race then became a free for all as Magnussen went off and nearly hit the wall.

Ricciardo then went on a charge as Bottas was getting ever closer Hamilton further away.

With 13 minutes left to go Hulkenberg pitted and then retired from the race, while Magnussen got a message telling him to go slowly as he had a MGU-K problem.

With just 3 minutes to go Bottas started to get his pace up and cut into Ricciardo’s lead over him.ith 6 seconds to go Hamilton crossed the line to start the final lap with Ricciardo still chasing him down, but with a 4 second gap it was too much and the Brit came across the line to win a race that no one expected as Sainz took career-best 4th place Perez in 5th and Palmer took his first points in 6th.

But with 6 seconds to go Hamilton crossed the line to start the penultimate lap with Ricciardo still chasing him down, but with a 4 second gap it was too much for the Australian and Hamilton came across the line to win a race that no one expected as Sainz took career-best 4th place with Perez in 5th and Palmer taking his first points in 6th.