We started Q1 with a warning for oil residue at turn 20 from one of the Porsche Supercup cars.

It was Raikkonen who set the early pace with a 1:44.060 followed by teammate Vettel.

Massa had a very close call hitting the wall at turn 21 and damaging his right rear wheel forcing a pit stop.

He wasn’t the only one with Ocon and the Haas’ all having similar shunts.

Kvyat had a big engine blowout as he came into the pits, with a plum of smoke pouring out of his Toro Rosso.

Verstappen then went fastest with Ricciardo behind.

Sainz then put in a stunning lap to go 3rd and Alonso then came at the last second to snatch the position.

Palmer also put in a last-ditch attempt to get out of Q1 and did so putting his Renault up to 5th. 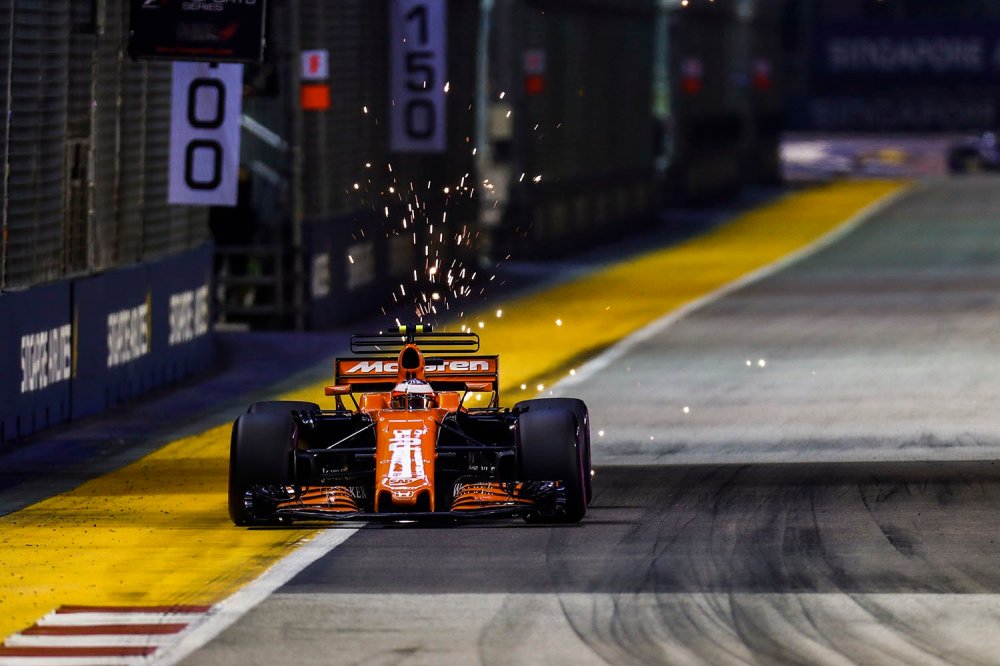 So Q2 got underway and it was again a Ferrari first out on track as Raikkonen again set the early pace with a 1:40.999 and Hamilton came in behind.

Vettel then took second place 4 tenths behind his teammate.

Verstappen again went fastest soon after as Ricciardo could only manage 3rd and Vandoorne went 6th.

Palmer again managed to scrap up to 10th and into safety but with 8 minutes left to go.

On the second runs Alonso was the first to set a lap and went 8th fastest with Hulkenberg going 7th and pushing his teammate Palmer out, Verstappen then went faster still to break the all-time lap time for Singapore for the second time.

Out in Q2: Palmer, Perez, Kvyat, Ocon and Grosjean.

Alonso was first out in Q3 with the rest waiting a little longer.

He set the first time with Vandoorne and Hulkenberg following.

Raikkonen went fastest as Hamilton failed to beat him.

Verstappen then took the top spot again and was the first into the 1:39’s only for Vettel to spoil the party going 0.145 seconds faster than the Dutchman.

Everyone then came in to change tyres and prepare for the pole shootout.

Raikkonen was the first of the top 6 to cross the line but failed to improve as Verstappen lost time sector 2 and also failed to go faster.

Hamilton and Ricciardo couldn’t match their first runs either, unlike Sebastian Vettel who, after scraping the wall and nearly ending his session there, was the only one to improve retaining the top spot to take pole position for the 49th time in his F1 career.