Lewis Hamilton has taken pole position at the Italian Grand Prix to top the all time pole list.

After an FP3 session that was delayed due to washout rain Q1 got under way in Monza, and it was Bottas leading the group out onto the soaking wet track.

On his first flying lap, he locked up at turn one and went off the track. But it was Hamilton who set the early pace with a 1:40.128

Grosjean then brought out the red flags after spinning and hitting the wall, having said the track was undrivable in the wet conditions.

Finally, after a 2-hour delay, Q1 got back under way with Max Verstappen the first in line.

And it was the Dutchman who went fastest initially followed by Vettel and Hamilton. There were also fast time from Massa, Ocon an Alonso going 6th, 5th and 10th respectively.

Stroll then put in a great lap to go 3rd.

With 5 minutes to go, Vettel, Alonso and Magnussen switched to the intermediates after Hamilton put in a 1:36.009.

Raikkonen nearly had a crash with a Force India in the pits as the team sent him to put out the fire on his brakes. He could only go 11th fastest on his lap.

Palmer miss timed his fast lap and failed to cross the line in time, while Ericsson went 18th.

Magnussen went 16th and Bottas topped the time sheets at the end.

Out in Q1: Magnussen, Palmer, Ericsson, Wehrlein and Grosjean.

It was Verstappen again who was first out in Q3 with most drivers going out on inters.

Vandoorne went for an early spin at Parabolica but managed to save it without hitting gravel, Massa also had a moment but continued on as well.

Vettel then went fastest with a 1:38.198 after Hamilton complained of the tyres not working the conditions.

Vettel then went 6 tenths up on his best while Hulkenberg went 4th.

Bottas moved up to 2nd and Vandoorne got into the top 10 as Vettel again beat his best by 2 tenths. 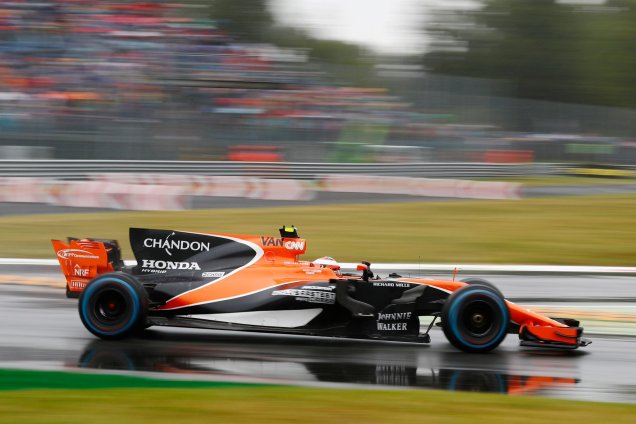 After deciding to go out on the full sets Perez came back in to change to inters after one lap.

With 3 minutes to go reports of rain started to come in around the lesmos.

Ricciardo could only manage 8th on the inters as Hamilton went on top with a 1:35.344 and Vandoorne climbed up to 7th.

Perez couldn’t quite manage to get into the top 10 and went 12th behind teammate Ocon who then moved up to 6th.

Ricciardo saved himself for the drop zone as Vandoorne got pushed out only to get himself back out and in 9th.

Out in Q2: Perez, Hulkenberg, Alonso, Kvyat and Sainz.

With the rain beginning to come down again Q3 got under way again with most on the inters.

On their out laps, Vettel and Verstappen battled for position with the latter nearly driving Vettel off the track.

Both Mercedes then made the change to full wets.

As the rain fell harder and harder Verstappen was on it and went fastest on a 1:36.113 as Ocon came just 6 tenths behind. Ricciardo then went 2nd to make it a provisional Red Bull 1-2.

It was short lived however as Ocon again went faster to split the 2, he was then overtaken by Bottas.

It was Ricciardo’s turn then to go first with Hamilton 0.084 behind.

The latter then went on top as the Ferrari’s seemed to be struggling in 8th and 10th with 3 minutes to go.

Hamilton was pitted for a fresh set of wets as the rain continued to get worse.

Verstappen then went fastest and Stroll moved to 3rd.

But it was Hamilton who prevailed with a 1:3 to take the all time pole record. And with the Red Bulls taking penalties Stroll will take his first front row start and Ocon will start P3.