(Note this will not be a race by race review, just my overview of the first half of the year)

We began the year with a new set of technical regulations which changed the look of the cars completely. We went from some fairly boring/simple looking cars to 2007 style cars with fins and bodywork come out from all angles.

And the new lower wider cars just look right even the shark fins have grown on me.

Speaking of shark fins, they became quite controversial. Along with the new T-wings, many believed they ruined the look of the cars. However, as I said many including myself have warmed up to them.

One of the biggest shocks of the start of the year was when Pascal Wehrlein crashed when racing Felipe Massa at the Race of champions.

The resulting back and neck injury left him unable to drive in the pre-season tests, and so Antonio Giovinazzi took over and continued to do so. When Wehrlein complained of more pain after FP1/2 in Austrailia the Italian got his first F1 race experience.

And he did very well getting 12th in Australia before crashing out twice in China.

So the first round in and we got exactly what we have been asking for for years. A real challenge to Mercedes, as Vettel went on to win for Ferrari. With Hamilton in second, they embrace in the paddock showed they both had high respect for each other and that we were in for a close fought but respectful battle.

But it also showed problems elsewhere. Palmer crashed in practice causing huge damage to his car. What was worse was that he then went on to blame the team for his poor race pace saying they hadn’t put it together properly.

That pretty much set the ball rolling for the Brits fall from grace so far.

The next round was a bounce back from Hamilton as he went on to win in very slippery conditions which caught Giovinazzi out twice, the Italian crashing in both qualifying and the race.

The momentum then bounced back to Vettel in Bahrain but he wasn’t the main talking point of the weekend. That honour belonged to Bottas who took his first career pole position sparking rumours that he may be more than just support driver to Hamilton.

But despite this Bottas seemed to struggle in the race and eventually, Mercedes had to make the call to let Hamiton by.

He then went on to prove that by taking his first win at the next round in Russia, not the most exciting race but still a special one for the Finn.

One person, we weren’t so sure about was Lance Stroll, having been brought straight from Formula 3 to F1 we didn’t expect much him. But by this point, he hadn’t even finished a race, now fair enough he was smashed into by Sainz on pit exit but everything else was on his side.

At Monaco, we got a surprise, Kimi Raikkonen was very strong and went on to take pole position. Many believed he would easily win the race and did pull out a gap to Vette in second. But then Ferrari made a call, they elected to pit Raikkonen first and left Vettel out a few more laps, a very fast few laps. The gap Vettel made put him a full stop ahead and allowed him to jump his team mate and win what should have been Raikkonen’s.

After having lost out on the win last year due to a pit stop error Ricciardo came home to take a much happier podium and start a long string of podiums.

The talking point of Monaco, however, was Alonso and his move tot he indy 500.

It let Button make one final comeback before retiring for good, even if it didn’t end well with Button flipping Wehrlein up onto his side before retiring due to broken suspension.

The fact that Mclaren let Alonso go to the Indy 500, while probably influenced by American Zac Brown, showed how desperate Mclaren are to keep him. Toto Wolff even said he wouldn’t have let either of his drivers do that, especially given it was the teams best chance of a good result.

It didn’t end well however as the Honda powered Andretti car Alonso was driving broke down near the end of the race.

Azerbaijan proved to be a pivotal point in the championship. not only did it over-impress with how good race was compared to 2016, but it was also home to the most controversial moment of the year.

You know the one, the incident that nearly caused Vettel to get a race ban and caused the fans to go mad when he didn’t.

Now I’m not gonna say it was on purpose or that Hamilton caused a collision by slowing down. But what I will say is that the punishment served was enough.

However, it did bring up the question of FIA consistency like nothing else I’ve seen. The fact that Hamilton went on to lose the race and still end up behind Vettel in the standings was the big issue.

Granted the reason for that was out of the FIA’s hands when hamiltons headrest came loose forcing him to pit. But a 10-second stop-go penalty just as Hamilton pitted didn’t look to be satisfactory.

The whole thing even went to a full tribunal were Vettel apologised and was no further championship action.

It turned the title fight on its head as the once friendly respectful competition was over and the gloves well and truly came off.

Azerbaijan also proved a pivotal point for Force India as the duo of Ocon and Perez came to blows again ending in Perez’s retirement. Many believed that this would force the team to implement team orders to keep their guys in check. After all their fighting in Canada lost them a potential podium to end in 5th and 6th.

It was Ricciardo who went on to win the race and after having been last on lap 1 Bottas came back to pit Lance Stroll to the 2nd as the rookie became the youngest podium finisher at the age of 18.

Silverstone ended in dramatic style went both Ferrari’s drivers suffered tyre failures which pushed Raikkonen down to 3rd and Vettel all the way down to 7th and lost him crucial ground in the championship. 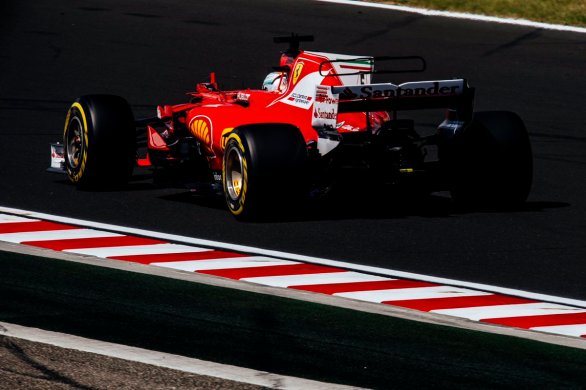 And so we came to Hungary with Hamilton and Vettel just one point apart and both with the championship lead to take into the break.

Vettel had problems when his steering went off centre causing him to lose time.

But Ferrari, despite the calls from Raikkonen to let him past and go for the win, they kept him behind to allow Vettel a buffer.

Hamilton, on the other hand, was flying and trying his best to get past team mate Bottas, eventually, Mercedes made the call to let Hamilton through but with the promise that if he couldn’t pass Raikkonen they would switch back.

But the dirty air proved too much for Hamilton and the team even offered him an extension to his 5 lap limit to make the pass.

everyone believed Hamilton would just keep the place as they entered the last lap, but he did the courteous thing and dropped back a huge amount to let Bottas back in the final corner whilst still keeping Verstappen at bay.

But the move dropped Hamilton 3 points and championships have been lost by less.

Speaking of Verstappen, it was a tense day for Red Bull. The team mates collided at turn 2 lap 1 which ended in Ricciardo’s retirement.

Verstappen was handed a 10-second penalty for the incident and spent the rest of the race recovering it.

The fact that Verstappen had plagued with engine issues a season which saw him retire from 5 races so far perhaps made him take more risks.

And Renault’s unreliability, in the Red Bull at least, has caused them to lose the much of the ground to Ferrari and Mercedes they had made up last year.

But that reliability seems to have been sorted out and with Re Bull having figured out what was wrong with the chassis early in the year, they could be a dark horse in this championship.

So what do think?
Let me know and please share this.