After taking his second career pole yesterday, Valtteri Bottas has taken his second win in Austria after a tense last lap charge from Sebastian Vettel.

The Finn beat Sebastian Vettel by just 0.6 seconds whilst Hamilton and Ricciardo were in their own close battle for the podium.

Bottas got a fantastic start, so good in fact that many believed he had jumped the start. However, a frame by frame analysis of the start showed he hadn’t.

It was another retirement for Max Verstappen after a very poor start with the car going into anti-stall. Kvyat then locked trying to avoid his team mate. He subsequently collided with the back of Fernando Alonso, who then went flying into Verstappen causing unrepairable damage to the Red Bull.

A bad start for Nico Hulkenberg meant he dropped from 11th to 17th.

By lap 8 Lewis Hamilton had managed to get up from 8th to 6th.

A fairly boring race ensued with many drivers maintaining positions. However, despite the race being expected to be a 1 stop, the high temperatures caused almost all driver to suffer from tyre blistering and excess tyre wear.

despite this Bottas pulled out a 19-second lead before pitting. But the front left was slow and thus Raikkonen got out ahead of the Mercedes driver.

Many believed Ferrari wanted Raikkonen to hold up Bottas for Vettel. However, Bottas got passed almost immediately. The Ferrari driver then pitted that same lap.

From a 6-second gap, Vettel managed to get within 1.1 seconds with 3 laps to go and went on a charge to take the Finn down.

Behind Hamilton was closing in on Ricciardo to try and scrape a podium.

A failed attempt at turn 4 left the Brit out of the running. Leaving him in 4th halving his grid position.

A much better day for the Williams drivers after a pretty poor qualifying Massa and Stroll got up to 9th a 10th respectively.

That left Palmer to get yet another 11th place missing out on points by a mere 0.5 seconds.

After serving a drive through penalty for ignoring blue flags with Raikkonen, Vandoorne came in 12th ahead of Hulkenberg. The Saubers were next with Kvyat, who also served a drive through for causing the first lap crash, behind.

Both Carlos Sainz and Kevin Magnussen suffered engine and gearbox problems and both retired. 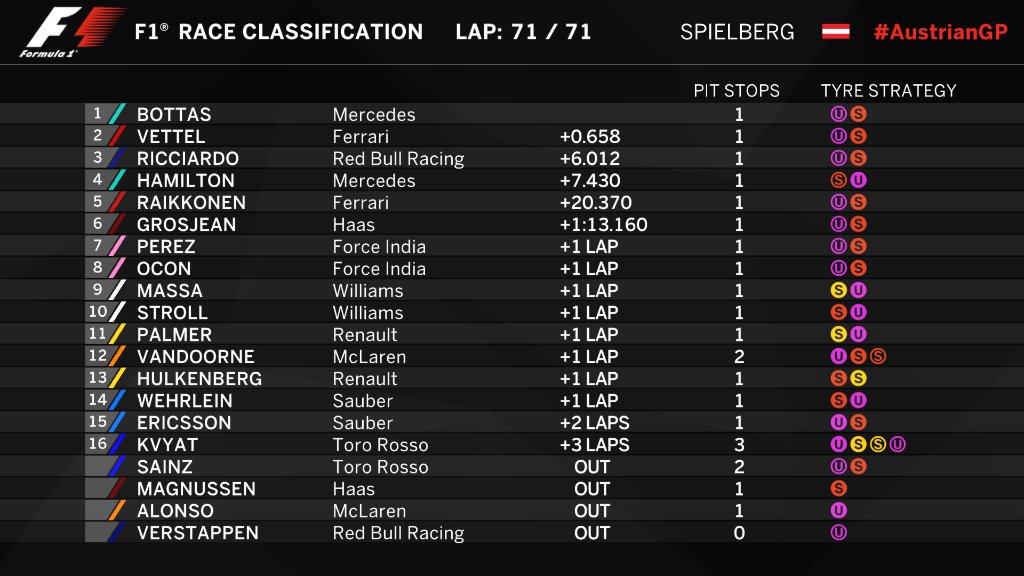