Valtteri Bottas has taken his second career pole in Austria ahead of Vettel and Hamilton as the latter takes on a 5 place grid penalty.

After brake problems in FP3 Hamilton set the pace in Q1 ahead of the two Ferraris and a surprising showing for Carlos Sainz in 4th.

It was Haas who set the early pace but problems then struck when Grosjean went off and Magnussen came to pits with a suspension failiure, leaving him unable to compete in Q2.

Further back Palmer and the two Williams drivers all seemed to be struggling with the former in 16th and Massa & Stroll behind. The Saubers of Ericsson and Wehrlein followed.

Despite having had to revert back to Honda’s ‘Spec 2’ engine, Mclaren’s Fernando Alonso was 13th overall.

Having gone out on supersofts initialy for Q2 Hamilton maanged to put in a fantastic lap of 1:04.800.

Bottas was next with Vettel in tow.

Hulkenberg just missed out on Q3 by 4 hundereths of a second. Alonso and Vandoorne where behind with Kvyat in 14th.

After the first Q3 runs it Bottas in 1st, Vettel Second, Hamilton third and Raikkonen forth.

And that’s how it stayed meaning Hamiltion will start in 8th after his grid penalty is applied.

Hamilton abandoned his second run after running wide in turn 1 and meesing up turn 5.

However a yellow flag for the stranded Haas of Romaon Grosjean in the dying seconds left him unable to improve. 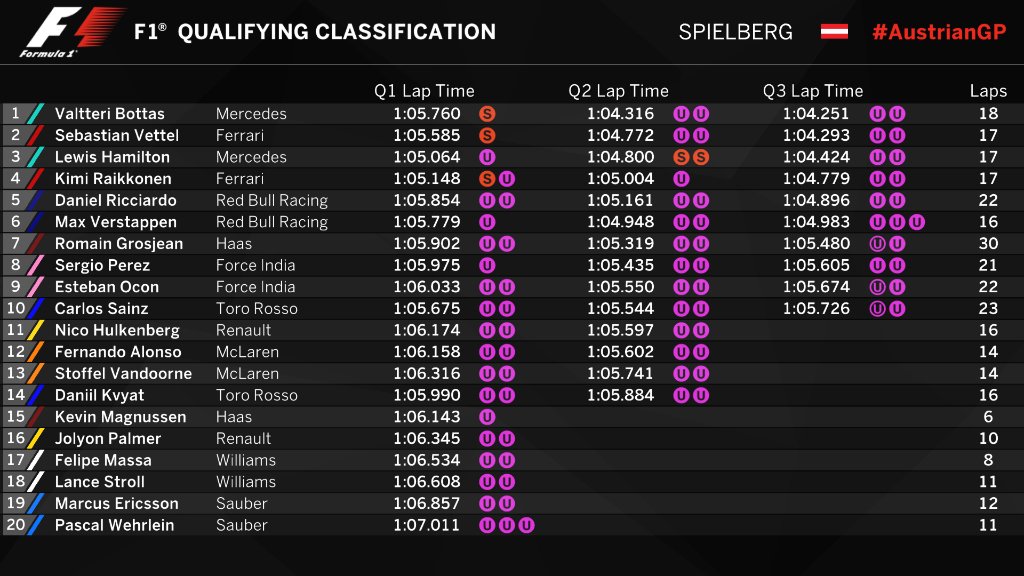