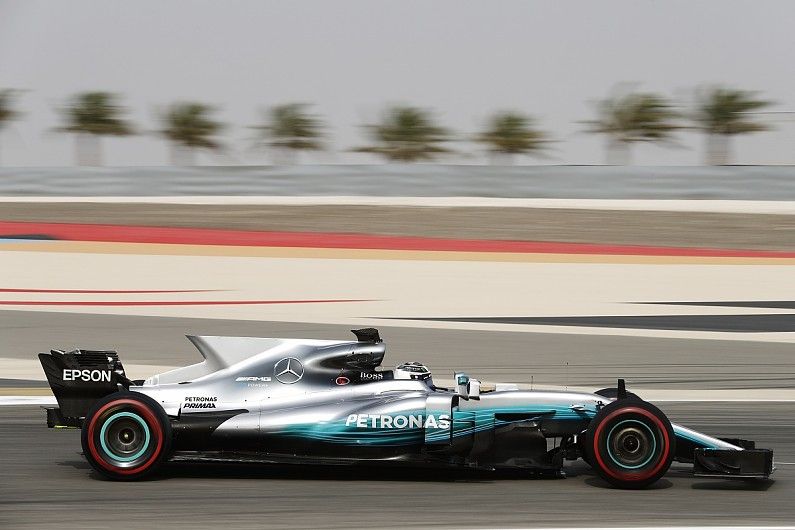 After missing out on the win in Bahrain, Mercedes were once again on top of the time sheets in the following in-season tests.

The first day of the test saw Giovinazzi return to F1. This time in the Ferrari whilst Sebastian Vettel completed a special 2018 tyre test for Pirelli.

Hamilton Piloted the W08 completing 97 laps with a best time of 1:31.358. Ferrari’s third driver Antonio Giovinazzi was 6 tenths behind with just 4 laps less.

The Red Bull of Ricciardo came third but a problem with his Renault engine halted his running. He was ahead of Romain Grosjean in the Haas with 87 laps. Nico Hulkenberg split the two Williams drivers in 6th.

F2 driver Sean Gelael made his F1 debut for Toro Rosso in 8th. Force India put their test driver Alfonso Celis in the car and were 9th ahead of Vettel for Pirelli and and Ericsson who completed the most laps of anyone at 106.

Despite testing ‘new ideas’ in this test the Honda engine in Oliver Turvey’s Mclaren could only manage 17 laps before it broke down.

Bottas picked up where Hamilton left off, getting the fastest lap of the day as well as the most laps with 143.

After completing a Pirelli test on day one Vettel was back in his race winning Ferrari to go second. However mechanical issues limited his running both before and after the lunch break.

The Toro Rosso of Sainz was 3rd with team mate Kvyat in 7th. After another day of Honda issues on Tuesday, Vandoorne took over running at Mclaren and had a much more promising day with 81 laps and the forth fastest time.

He was ahead of Kevin Magnussen’s Haas and the Force India of Ocon all three were less than a tenth behind each other. Ocon’s team mate Perez came last with 70 laps.

Gary Paffett, who used to test for Mclaren, completed over 100 laps in 8th for Williams. Russian Sergey Sirotkin was in the Renault and managed 90 laps just behind Paffett.

2016 GP2 champion Pierre Gasly was tenth in the Red Bull, Wehrlein just behind having done 91 laps.

Testing results are as follows